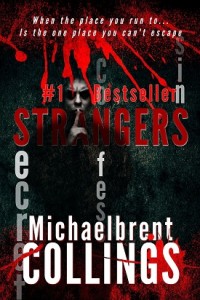 To unwittingly become a part of this deadly game, you must have secrets, things that can never be known, something that can destroy your life and there’s only one chance for redemption, you must confess.

A family suffering the loss of a son, drift through life growing further apart by the day, come the anniversary they attempt some semblance of normality, a stab at family interaction, with a simple meal and some TV. It can’t repair that which has crumbled over time but their tainted lives are about to take a shocking plunge into sheer panic.

They wake in the morning, somethings not right, someone’s been in their home. They can’t get out, doors won’t open, Windows are barred, there’s no way out. The nightmare has begun.

The first chapter is a crime scene, a sickening crime scene and there’s no shortage of police officers waving goodbye to their lunch. This gives a mere taste of the stories assailant and he remains very much on the periphery, orchestrating events. What makes this a truly chilling experience is what happens with our family, two adults, two teenagers and their secrets slowly revealed.

This is a totally gripping psychological horror, you just can’t put it down and I’ve never, ever, bitten my nails before. I did here believe me. You drill it into your kids not to talk to strangers, yet you’re never that vigilant as an adult, nothing can happen in your own home, well think again.

If you fancy immersing yourself in a truly terrifying story that layers so many shocks and stunning twists then you won’t go far wrong with Strangers by Michaelbrent Collings.