In news that will surprise nobody, the hit Netflix original series Stranger Things has secured a second season. It has become one of the most talked-about shows of the year – or decade? – with critics and audiences praising its retro vibe and homage to films of the 80s, but also its overwhelming uniqueness. The cast were fab, the horror elements were great and it was a heap of fun. If you haven’t watched it yet, then drop everything and get yourself onto Netflix. 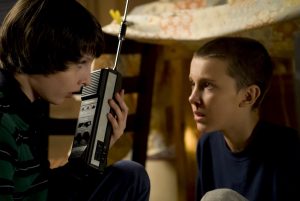 Synopsis:
Set in 1983 Indiana when a young boy vanishes into thin air. As friends, family and local police search for answers, they are drawn into an extraordinary mystery involving top-secret government experiments, terrifying supernatural forces and one very strange little girl.

When speaking about the new season, the show’s creators The Duffer Brothers announced that all of the main characters will probably return – hooray! – but, there is no confirmation if Eleven (Millie Bobby Brown) will make an appearance. I would argue that the end of Season 1 suggests that she would, but what do I know? Additionally 4 new characters will be added and the story will explore the Upside Down further, not limiting its area to the town of Hawkins. So, what we should expect is something bigger and maybe better than the first season – is that even possible? The Duffers revealed that they have drawn inspiration from sequels such as Aliens and Terminator 2 for Season 2, so that is superbly exciting. Hurry up 2017.

Check out the teaser for Season 2 below, which confirms that the show will be returning to Netflix in the autumn of 2017, so we have just over a year to wait for more sci-fi drama.