Following the cryptic Superbowl spot, we can now bring you plot details from the upcoming second season of Netflix’s Stranger Things thanks to Entertainment Weekly, who also scored a host of new stills. 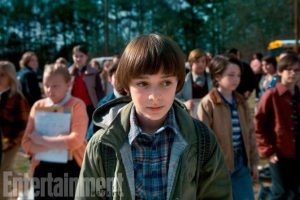 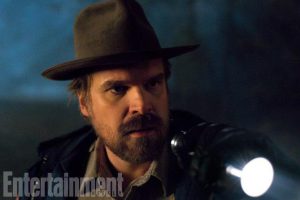 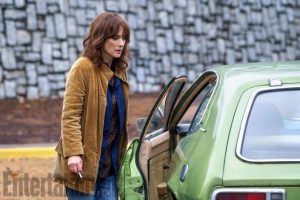 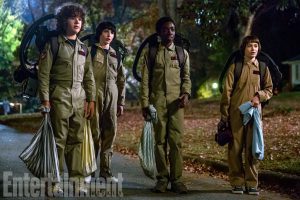 As reported by the site, “Stranger Things season 2 begins nearly a year after the first instalment, on Halloween in Hawkins, Indiana. Will has rejoined his pals after being rescued from The Upside Down. But all is not well with young Mr. Byers, as evidenced by the slug he coughed up in season 1’s final moments.

His ultra-fraught mother, Joyce (Winona Ryder), is attempting to make things stable for Will and his brother, Jonathan (Charlie Heaton), and she is dating an old high school classmate, Bob (The Goonies’ Sean Astin).

Meanwhile, Hopper (David Harbour) is attempting to keep all the events of last season a secret in order to protect Joyce and the kids. Siblings Nancy (Natalia Dyer) and Mike are also much changed and mourning the (seeming) deaths of friends Barb and Eleven (Millie Bobby Brown).

Shaking up the dynamics in Hawkins is the arrival of another brother-sister duo, Billy (Dacre Montgomery) and Max (Sadie Sink). While Max becomes pals with the boys and attracts romantic interest from Lucas and Dustin (Caleb McLaughlin and Gaten Matarazzo), Billy doesn’t exactly make friends.”

While it sounds like we can expect all kinds of new character dynamics and conflicts, series creators the Duffer Brothers are keeping quiet about what new monsters may appear. They do say that the rift to the Upside Down is still open however, and that season 2 will explore “different kinds of horror.”