A lot of news has come in these last couple of days regarding an upcoming Hellraiser sequel, the first since 2011’s widely-disliked Hellraiser: Revelations. While talk of a reboot has been ongoing, this sequel has apparently come out of nowhere, despite the fact that it is reportedly due to start shooting this very month! Regarding the casting though, there is both good news and bad. 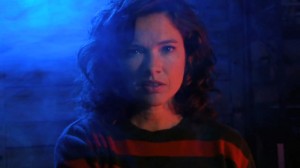 The exciting casting news is that none other than Elm Street survivor Heather Langenkamp has a role, as revealed by the horror icon herself in an interview with Scare Tissue, in which she let slip that she is shooting her scenes next week. “I actually have an opportunity to play a small part in Hellraiser – the new Hellraiser. I’m so excited about it. I go next week to do the shooting,” she told the site. “The script is amazing and that I got the part is something that I find incredible.”

Langenkamp also revealed the film’s director. “It’s Gary Tunnicliffe who did all the makeup for all these years. I think it’s going to be pretty outstanding.”

It seems unbelievable that such big news has been kept so tightly under wraps when the shoot is so close, and no sooner had the bombshell dropped, that Doug Bradley opened up about the project on his Facebook page. He makes it pretty clear that, as with Revelations, he will not be playing Pinhead. This is what he wrote:
“Ladies, Gentlemen and Others,
I gather word is beginning to spread about the new Hellraiser movie which is, apparently, already shooting.

First, a point of clarification. This is the first time I have said anything about this. Anything else you have heard me say about any proposed Hellraiser film refers to the constantly rumored remake. And, for the record, I still know nothing about that.

First I heard about this new film was around Christmas in a phone call from Gary Tunnicliffe, who was my make-up artist on Bloodline through Hellworld. Gary, you may recall, also wrote the screenplay for Revelations. He has written and is directing this new effort, tantalizingly called “Strike Accord”. I can also assert, contrary to some rumours I’ve already seen, that Clive Barker is not involved with this in any way, shape or form.

Gary said he would send me a copy of the script when he had completed a second draft, but before I could be allowed to set eyes on the precious document, I was required to sign a gagging order. This was a three page document preventing me from talking about the script ‘in restrooms’, ‘on elevators’, ‘in restaurants’ or ‘in cellular telephone conversations which may be overheard’. There was also dark reference to ‘people talking out of turn at conventions’. I read this thing in disbelief, and informed Gary I would not be signing it.

And that’s that. Clearly, I am deemed too much of a security risk to be allowed to read a Hellraiser script. People are starving to death in Syria and they’re worried about me talking about a Hellraiser movie? Get a fucking grip. Can you say ‘sense of proportion’?

Anyway, story short: a new movie is happening and I have nothing do with it. I was unable to make a decision about it because I was not allowed to read the script, unlike Revelations where I made a conscious decision not to do the movie based on the motives for making it and the poor quality of the script.

By the ‘motives for making’ Revelations, Bradley is presumably referring to the widely-held assumption that The Weinstein Company rushed the film into production so as to keep hold of the rights for the more lucrative potential reboot.

So there you have it. A new Hellraiser film, of which we know very little, starts shooting next week, with Heather Langenkamp but no Doug Bradley, and that is not something I expected to type today.