THE STRANGE COLOR OF YOUR BODY’S TEARS

Synopsis:
A telecommunications worker named Dan returns home form a business trip and finds his wife missing. While attempting to locate her, he becomes entangled in a mystery, all confined within his apartment building. 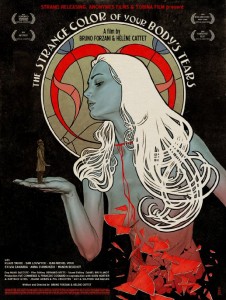 One phrase that’s overused in criticism and review is ‘style over substance.’ It’s an easy way to describe something as aesthetically pleasing to the eye, but lacking in depth. However, there’s no better way to describe the 2013 French Giallo film The Strange Color Of Your Body’s Tears. It certainly has style, and quite possibly too much. It’s a failed homage to the Giallo subgenre of the 1970s. Sadly, it only ends up being a virtual kaleidoscope of overused color saturation.

While it certainly has the look of an old Gialli at times, it’s missing one key element–A stable and steady plot. Conspicuous by its absence is any sort of straightforward direction or fluid continuity. There are still the staples we’d expect to see, such as the black-gloved killer, the unsavory characters, and the ordinary person thrown into extraordinary circumstances. Whatever elements of mystery or suspense might have existed are heavily diluted and lost in a sea of excessive color and overblown imagery. Nothing’s really allowed the necessary time to develop or pan out. Characters and sub plots are introduced so often, it’s very easy to lose sight of the story, or keep track of the events as they unfold. Watching this film is akin to having a bright, colorful jigsaw puzzle, but without a box top.

Aside from the plot lacking direction, the cinematography seems to be completely unaware of where it needs to be. Sometimes it’s a straightforward approach, other times it shifts to black and white, or we’re treated to an annoying and distracting image-within-an-image shot. One might the argument that this is an artistic endeavor, but here it just comes across as pretentious pseudo-art house drivel. There’s a fine line between art, and a film trying way to hard to impress an audience with its imagery. This is most certainly the latter. If the plot had been stronger and the story better written, some of these techniques might have worked. When it’s excessive just to be excessive and colorful, everything gets lost, and the whole endeavor becomes pointless. 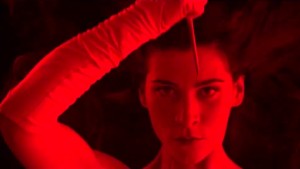 There might be a few hardcore fans of Giallo who might like certain a aspect of this one. There are a lot of references to several other works in the genre, as well as a nod to scream queen Edwige Fenech. However, that’s another problem that this has. It relies too heavily on the viewer being familiar with the genre, so anyone new to the world of the lurid Italian crime novel would dismiss this altogether. That’s the final nail in the coffin; and also why it fails to stand on its own two feet as anything memorable, or worth watching a second time.