Billed as the “first ever stoner slasher”, 4/20 Massacre blazes its way onto VOD and DVD in plenty of time for the unofficial weed lovers’ holiday, and we’ve got a few kushy stills to get you in the mood.

Horror icon in the making Jamie Bernadette (I Spit on Your Grave: Deja Vu, Killing Joan) and Divergent’s Justine Wachsberger star in the film, which promises “suspense, smoke and spine-tingling chills.”

Dylan Reynolds wrote and directed the flick, which sees five women head into the woods over the 4/20 weekend for some birthday celebrations and high times. Soon enough, they stumble onto an illegal marijuana growing operation and must struggle to survive the living nightmare that meets them. 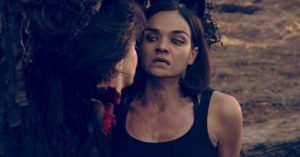