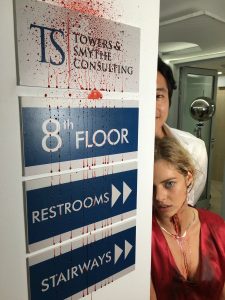 As The Walking Dead’s Glenn, Steven Yeun is no stranger to being splattered in blood, and he’ll be seeing plenty of the red stuff in Joe Lynch’s Mayhem, which has its world premiere at the ongoing SXSW Festival. Check out the new poster below.

Yeun stars opposite Samara Weaving, who had a recurring role in Ash vs Evil Dead and will soon be headlining McG’s The Babysitter. Wrong Turn 2/Everly helmer Lynch directs Mayhem from a script by award-winning screenwriter Matias Caruso. The film was shot last year in Belgrade, Serbia. 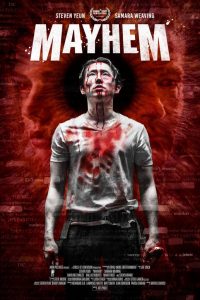 Synopsis:
After being framed for corporate espionage on the same day that a mysterious virus is unleashed on his company, attorney Derek Cho is forced to savagely fight tooth and nail for not only his job but his life.

SXSW will run until Sunday 19th March, in Austin, Texas.