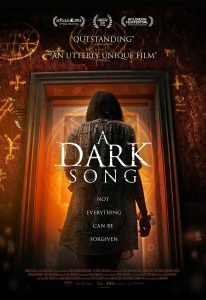 Films don’t get much more ambiguous than Liam Gavin’s directorial debut A Dark Song, and it’s precisely this ambiguity that keeps what is essentially a slow-burner, driving along at an unrelenting pace. Despite being set almost entirely in one location and with just the two leads sharing most of the screen time, I haven’t been this captivated and perched so close to the edge of my seat thus far this year.

Penned by Gavin, A Dark Song follows Sophie (Catherine Walker), a determined young woman who reaches out for the help of a damaged occultist (Steve Oram) but the two soon find their lives and souls at risk when they perform a dangerous ritual that they believe will grant them what they want.

With A Dark Song heading to cinemas this April 7, SCREAM’s Howard Gorman caught up with Steve Oram to talk about striking just the right balance between genius occultist and bullshit artist to reel the audience in right until the final reel…

SCREAM: I know the script passed a fair few hands before it reached you so how did you end up crossing paths and what was it about the script, and this particularly grounded take on magic and the supernatural, that pulled you in?

Steve Oram: I just loved the ambiguity of it and also how my character is somewhere between a genius and a complete bullshitter. The two-hander nature of it was also really appealing and it gave me a chance to go into great depths with the character. Also, of course, working with Catherine [Walker] was a big thing. She’s a bit of a legend so I couldn’t have been more pleased about that.

Well it was a mixture of things really. I did delve into the world of Crowley a bit. He was a pretty unpleasant guy really and pretty much best described as a con artist who would abuse people in that way. One of the things that struck me about it was the ambiguity of “who’s using who?” because you think that my character must just be after money or sex but then there’s this sense that Catherine is very complicit and has the upper hand at some points.

I did also base my character on people I knew growing up (laughs) who were quite weird. Some weird, mad bastards you might meet in a pub and get talking to who are a bit intense and quite scary. There were quite a few of those people around when I was younger.

SCREAM: Balancing that mix between Aleister Crowley and the mad bastards you knew growing up can’t have been easy but you really do succeed and the audience can’t help thinking there really has to be some kind of truth to what you’re preaching.

He seems very committed and seems to believe it on some level. But on other levels, it’s a very weird thing to do, isn’t it? To commit yourself to magic. I mean, the truth to that is that those people have got some sort of issues in their past and are a bit damaged and a bit weird in their personal lives. I think that’s what I think I was trying to do with my character.

SCREAM: Something that I came across in a review was a comparison between your relationship with Catherine in A Dark Song and the two main characters in The Karate Kid. It does actually make a lot of sense that a reviewer would say that.

The Karate Kid? (laughs) I haven’t heard that yet. That’s a good one! But I guess there is that in the sense that she is so keen to learn and so naive in some ways, although it’s a little less fun than it is in Karate Kid (laughs). Seriously though, she touches on her health problems and that’s really powerful and it was an amazing thing to pull off and get just the right tone.

SCREAM: A lot of the intrigue comes from the fact that the both of you have a lot of skeletons in your closets which reveal themselves as the film progresses. Did you get much chance to discuss all those skeletons and your backgrounds with Catherine before the shoot? 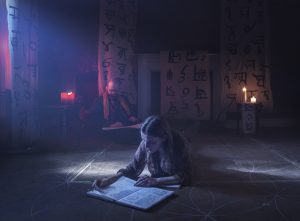 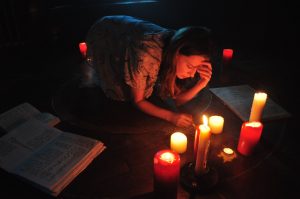 We only had about a week before we started shooting but we did a bit. We had a week’s worth of rehearsals in Dublin. We both prepared it individually a lot and then we brought it all together in that rehearsal period. It was quite good in the way that we didn’t quite know what each other was doing but we definitely shared a lot of sensibilities in terms of how to present it. Most importantly, we just clicked as people quite quickly and that in itself was probably one of the biggest things.

SCREAM: Was that the case when it came to some of the more torturous scenes because you put her through the royal ringer at times?

Yeah. You can’t really rehearse the things we did there. (laughs) Although we did actually look through those moments in rehearsals with Catherine lying on the floor and me pretending. But you can’t really prepare yourself for some of those moments. Scenes like one which involves a bathtub were really horrible things to do. It was all totally, safely and brilliantly done but it still was a horrible thing to have to do to Catherine and I think that really comes across on the screen.

SCREAM: The practical effects are fairly subtle but amazingly realistic and work very much in line with the tone of the film and really get under the skin.

The Bowsie Workshop did an amazing job. They made everything as graphic and horrible as possible, as always. Again, that was one of the more uncomfortable things of the movie – having to wear those things – but it all comes across so brilliantly in the film. The horrible reality of it … And all the pus. Lovely!

SCREAM: Was the derelict house where you shot the film as insanely creepy as it appears in the film?

It was! We filmed in two locations so all the interior stuff was in a separate house. It was actually quite a strange, derelict house outside Dublin. It really was creepy because everything was decaying. It was genuinely a disgusting, horrible, rotting place. And then you add a film crew to that and it becomes twice as disgusting. But the exterior stuff was just beautiful out in Wicklow.

When we shot the interior stuff it was all done in four different rooms so it was almost like doing a stage play really. It was a really intense experience.

SCREAM: The artwork your character creates on the floors is out of this world. I can’t even begin to imagine how much work went into that.

I know, right? There was one girl who spent about three weeks just doing all of those crazy symbols. It was a brilliant bit of work. It was all just made up artwork and none based on anything Aleister Crowley or any other occultists might have used. There was no real magic in there – as real as magic is! All pretend. (laughs)

SCREAM: You’re an unstoppable beast with all kinds of things on the go but is there anything you can tell us about that you’ve got on the cards in the near future?

My film Aaaaaaaah! came out last year and I’m doing a follow up to that now which is called Dregs and we’re just getting into that now. It’s a subversive period drama/comedy about two very rebellious housemates in a country house. It’s a bit like Downton Abbey gone wrong.

SCREAM: And will that fall into a similar realm as Aaaaaaaah!?

Well, it’s got words in it and it’s not quite as ape-based. There’ll be a few more period costumes too. But it’s definitely got a lot of the same sorts of sensibilities and it’s going to be chaotic and, hopefully, good fun.