The first instalment of the two-film adaptation of Stephen King’s It has wrapped filming in Toronto. Producer Barbara Muschietti announced the end of the shoot via Instagram, posting a cute lil’ pic of Pennywise as a jack-in-the-box. The image below is a cropped version – you’ll have to head over to Barbara’s feed to see the full image. 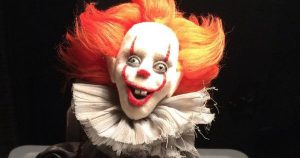 Muschietti’s post read: “And yes, it’s a wrap on #itthemovie. Thank you amazing cast and crew for this magical journey. And thank you #stephenking for giving us this tale.” 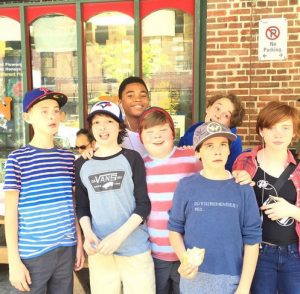 The first of two films focuses on ‘The Losers’ Club’ – played by Jaeden Lieberher, Finn Wolfhard, Sophia Lillis, Jack Dylan Grazer, Wyatt Oleff, Chosen Jacobs, and Jeremy Ray Taylor – as children, as they take on the ancient evil in clown guise. The second film will see the group reunite as adults to destroy Pennywise once and for all.

Nicholas Hamilton plays bully Henry Bowers, with Owen Teague as his emotionally damaged partner in crime, Patrick Hockstetter. Creature performer Javier Botet plays The Leper, one of several terrifying apparitions sent by Pennywise, who is played by Bill Skarsgård, stepping into the role previously portrayed by Tim Curry in the half-baked 1990 miniseries.

Andy Muschietti (Mama) directs the film for which, it must be said, hopes are pretty high.