Stay Behind the Fence in a New Clip from the Extinction 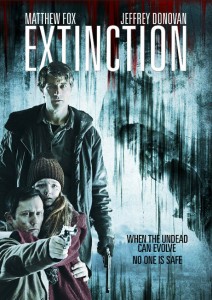 A new clip has been released online for the zombie horror film Extinction. The clip shows a little girl venture past the fence which has kept her and her father safe from the monsters that now prowl the earth. It doesn’t hold back and offers us a great look at the creatures in their pale-skinned, bloody glory. The clip ends at a drastic moment and should certainly leave you wanting to see more.

Extinction comes from director Miguel Angel Vivas, is based on the novel by Juan de Dios Garduno and stars Matthew Fox, Jeffrey Donovan and Quinn McColgan.

Synopsis:
“For nine years, Patrick (Matthew Fox), Jack (Jeffrey Donovan) and his daughter Lu (Quinn McColgan) have outlasted the zombie apocalypse by shutting themselves off in the snowbound town of Harmony. The monsters have seemingly disappeared, with no sign of other survivors, but the constant fear of the unknown is starting to take a toll on this makeshift family. When Patrick goes scavenging for food, he discovers the undead have returned and evolved into something terrifying, beyond imagination. Will the last breath of the human race survive a second zombie apocalypse?”

There is no word on a UK release date yet, but Extinction will be released in the USA on 31st July 2015.