Starry Eyes Directors taking us back to the Pet Sematary 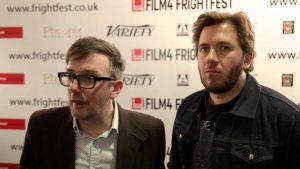 Before their It adaptation had even started raking in box office gold, Andrés and Barbara Muschietti had expressed their keenness to take a stab at another Stephen King novel, namely Pet Sematary. Paramount, who hold the rights to Mary Lambert’s 1989 adaptation, have other plans for a fresh adap however and while the Muschietti take would no doubt be a good one, the studio appear to have made a damn fine directorial choice.

As reported by Deadline, Paramount have hired Dennis Widmyer and Kevin Kolsch (pictured), the writing/directing duo behind 2014’s Starry Eyes to direct, and one has to think they’d do a hell of a job. On producing duties are Lorenzo di Bonaventura and Steven Schneider.

Described by King as “the most frightening book I’ve ever written,” 1983’s Pet Sematary tells the tale of Louis and Rachel Creed, who discover the re-animating properties of an Indian burial ground behind their new house. Louis decides to bring back Ellie’s cat after it is killed on the road, but when a horrible tragedy strikes the family, they find out that “sometimes, dead is better.”

Lambert’s 1989 film, while not devoid of gut-punch nastiness and memorable imagery, never quite came together as a whole, failing to capture the raw emotional horror of King’s novel (one he shelved for years, believing he’d finally gone too far). This is therefore, a reimagining that I’m fully on board with.