“Not another zombie movie’’ is a phrase which has echoed throughout the horror community for a while now, but every so often one comes along and reminds you that there might be life left in the undead subgenre after all.  The latest to reinvigorate it is It Stains the Sands Red, a horror dramedy from Grave Encounters duo, the Vicious Brothers

The film opens with Molly (Brittany Allen) and her gangster boyfriend Nick (Merwin Mondesir) driving through a desert highway on the way to an airfield amid a zombie outbreak.  Molly snorts coke, necks hard liquor straight from the bottle and is just an all-round train wreck, and when they need to pull over so she can vomit, their car ends up stuck in the sand, leaving them stranded.  Then, when an undead flesh eater appears and has Nick for dinner, Molly is left to fend for herself if she wants to survive.

When Molly is left to her own devices, It Stains the Sands Red becomes so much more than your typical zombie film.  As her journey to the airfield takes her into the desert on foot and she is pursued by the zombie who ate her boyfriend, she is forced to sober up and come to terms with her past.  The zombie (which she names Smalls) ends up becoming her confidant and we learn she has a son, whom she abandoned to be raised by her sister so she could party.  The relationship between the woman and the zombie goes from tense to endearing, and what ensues is a tale of redemption that oscillates between comedy and profoundly human drama. 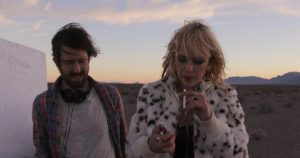 Brittany Allen carries the entire film with aplomb, and her performance is up there with the best the genre has had to offer in recent years.  Her transformation from fractured party girl to strong, independent mother is fiercely brilliant and believable.  Her character is relatable on so many levels; initially we might judge her, then we’re reminded that we shouldn’t ever judge a book by its cover because who knows what’s really going on beneath the surface. We’ve all made mistakes and experienced moments we wished played out differently. Some people are led down unconventional, undesirable paths, but it’s never too late to make amends.  That’s the theme behind It Stains the Sands Red which makes it transcend its subgenre and become something so much more.  At this moment in time, It Stains the Sands Red is the best zombie film since Shaun of the Dead.