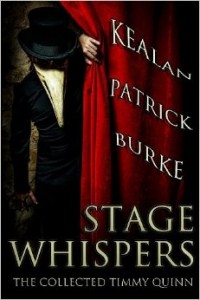 Stage Whispers contains the first four novella’s and the concluding novel covering the life of Timmy Quinn, from the young boy cursed to look on the dead to the man fated to stop the vengeful deceased from rising.

In The Turtle Boy, Timmy Quinn and his best friend Pete Marshall encounter a strange boy at Myers Pond and here starts a journey filled with terror, betrayal, murder and the discovery of disturbing secrets. This opening novella is wonderfully written and you are immediately invested in the story, gripping narrative, haunting atmosphere and consuming characterization. If you’ve not read The Turtle Boy, it’s free on kindle and is well worth an hour of your time.

In The Hides, Timmy & his Father go to live with his grandmother in Dungarvan, Ireland and his ability to see the lingering dead, which often ends in some form of resolution is about to show dark secrets hidden by his own family. A more personnel affair this time for Timmy, where The Turtle Boy shows a young boy developing a disturbing gift, The Hides delves further into his curse and the lack of control he has over it, in a truly chilling conclusion, the dead show the power contained in the rage of the unlawfully killed.

Vessels is the third novella and to give the story some more depth we have the re-introduction of Timmy’s on/off girlfriend Kim, Timmy is seriously at odds, he wants Kim but at the same time knows that being with him will put her in danger. From the beginning Timmy hears a startling admission, the curtain had parted and the dead had come to exact revenge on one he loved but they were stopped by a voice and it’s his Father who had to live with the guilt. Now he points Timmy to Blackrock Island, a place of sanctuary, a place where there’s never been a reported murder.

On the Island he’s drawn to the ancient chapel where he soon realises no place can be free of evil and there he hears the whispers that have blighted his life, the terrifying ghost of Edmund Brennan who was hung from the crucifix. Vessels builds to a tense climax as we learn more of what Timmy is destined to face and I’ve got to say this is wonderfully descriptive, alluding to the stage, the curtain and the vengeful departed.

Peregrine’s Tale is the next story in the series and introduces a new protagonist, a short read that if anything could have been attached to one of the other novellas but it is important and introduces a character that’s instrumental in the endgame, his purpose is certainly one to think over.

Nemesis: The Death of Timmy Quinn is the coup de grâce and as finishing blows go, this is sensational. Nemesis entwines all the threads of the previous 4 novellas and so much more that we didn’t even get a hint at. Have to say I was stunned at the sheer magnitude of it all. In fact, stands up and applauds, this has to be one of the best books I’ve read, epic describes it perfectly. The author showed incredible imagination with the series up to this point but with Nemesis he smashed it out of the ground.

And to end on news that this story isn’t quite over yet, there is an exclusive preview of Night Falls on Memory Lane, the first story in a new series featuring Cassandra Quinn, Timmy’s daughter, to be released in the summer of 2015.