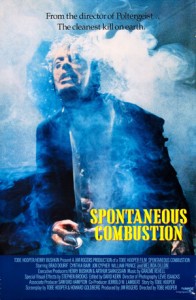 Synopsis:
Amateur actor Sam Kramer (Brad Dourif) discovers he is cursed with the power of pyrokinesis (the ability to start fires with his mind). This unruly talent attracts the attention of father figure and local scientist Lew Orlander (William Prince) but Sam’s fire conjuring skills grow out of control after a conspiracy relating to his ability is exposed. Sam sets out to learn the origins of his curse in attempt to suppress his fiery temperament.

Over the years, many horror film fans must have wondered what had happened to Tobe Hooper. The director of The Texas Chainsaw Massacre almost replicated the brilliance of his astounding horror debut with the terrifying adaptation of Stephen King’s Salem’s Lost in 1979 and again with the Spielberg produced Poltergeist in 1982. While a middling sequel to his debut masterpiece, The Texas Chainsaw Massacre 2 (1986), divided opinion with its gaudy flourishes, Hooper went on to helm a series of botched horror/ sci-fi films throughout the 80s and 90s, most of which were not worthy of being labelled “from the director of The Texas Chainsaw Massacre”. The varying quality of Hooper’s work suggests Texas Chainsaw could merely be a masterpiece of expert editing, or maybe Spielberg did ghost-direct Poltergeist, as rumours suggest? People can assume but there is no denying Hooper’s wild, wondrous imagination and feral eyed ability to conjure so many unique and ingenious concepts, regardless of the botched execution from which they manifested.

Yet most of Hooper’s later, lesser works remain somewhat mislaid. Lost in DTV limbo, within rain-damaged/ sun-faded cases at car boot sales and secret flea markets, or banished to the darkest corners of ebay/ online streaming sites where they’re unable to tarnish our memories of his finest hours. Spontaneous Combustion is one of those blunders. Arriving in 1990, between episodes of Freddy’s Nightmares, Amazing Stories and Tales From The Crypt, it’s a shoddily executed clutter of analogue/ mad scientist sci-fi and latex loaded body horror. The novel central concept is mired by patchwork acting, cardboard dialogue and plot-bombing edits, yet the film boasts a wide variety of imaginatively rendered (but of their time) practical and visual effects, with the kind of unique (but fumbled) horror sequences that recent franchise sequels or manufactured genre remakes lack. These exhibit Hooper’s inimitable vision but fail to compensate for a abominably wretched production that highlights his inability to transfer those unique ideas into a lean and linear feature.

Brad Dourif conveys an animal madness with maniacal glee as cursed protagonist Sam Kramer: the endearing and ignorant actor with fire starting skills that soon turn nasty when colleagues double-cross him, but the rest of the cast meander bored and anaesthetised. A nostalgia rousing opening credit sequence of green, 80s neon complimented by a Casio sounding score by Graeme Revell goes some way to stoking elation while fake old news footage of scientists attempting to enhance the power of the atom makes for an initially curious but ultimately cumbersome set up. Some light comedy is supplied via a blazing John Landis, several limb bursting escapades and a flame-throwing telephone, and the script is dotted with psychic phenomenon references that augment the supernatural elements and religious connotations via Christian radio shows. Hooper’s film has an enigmatic nub and a great deal of vision but is woefully ham-fisted, barely coherent and utterly preposterous. It’s hard to believe it is directed by the same visionary behind Salem’s Lot, Poltergeist and The Texas Chainsaw Massacre. Rather than seek this out and tarnish your memory, it’s better to just re-watch those instead.