The biggest spoiler regarding Blumhouse’s upcoming Halloween reboot may have been dropped far from the panel at prestigious Hall H. Horror fans on the floor gravitated towards NECA’s massive display; one of the featured products was an extremely detailed, articulated Michael Myers action figure, one modelled after the revamped character design we’ve already seen in promotional photos and in the trailer.

It’s truly a work of art, but what drew my attention wasn’t the fine sculpting or overall aesthetic, it was an accessory. The Michael Myers action figure comes with a tombstone (for Judith Myers), a jack o lantern, and a decapitated head. Here’s the thing: It’s not the typical severed victim’s head you’d expect to see; it’s carved and mutilated in a way that seems extremely specific. Have a look. 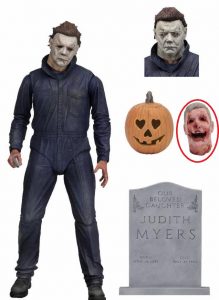 If you watch the trailer, we meet a documentarian who attempts to get a rise out of a geriatric Myers by showing him his old mask. It seemed almost like he was tormenting “The Shape”. Could this be his desecrated cranium and, if so, did NECA’s display reveal a particularly gruesome kill? This inquiring mind thinks… maybe.

I suppose it could be Myers himself, but considering director David Gordon Green is keen to make a sequel, I’m less inclined to think so.

Look for Halloween to hit US Theatres on October 19th, just in time to coincide with John Carpenter’s original Halloween, released in 1978.