With a title that’s difficult to resist and riffing on ‘80s slasher movies, horror comic Lord of Gore has been unleashed, with issue 1 available now from comixology.com.

Published by Devil’s Due Entertainment, the blood-drenched volume is the work of creators D.B. Stanley and Daniel Leister, and sounds like a delicious proposition indeed.

Here is the official word from the press release:
“Decades ago scandal propelled the Lord of Gore B-movie franchise to mainstream success. In 1989 the film’s costumed slasher actor murdered a young actress in ways worse than his on-screen character, creating a media frenzy. Now on the cusp of a modern reboot, a struggling screenwriter learns that the deranged star wasn’t the only guilty party that night, but before he can share the information, the film’s slasher seems to have stepped from the screen into real life to stop him.”

Check out this artwork and tell me you’re not intrigued! 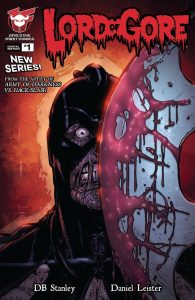 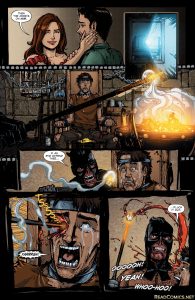