The Spirit of Vintage BBC Spookers Lives on in The Telling

Currently seeking funding via Indiegogo is UK horror short The Telling, a supernatural yarn inspired by the spooky British TV dramas of the ‘70s and ’80s, in particular the likes of Children of the Stones, The Quatermass Conclusion and Day of the Triffids. 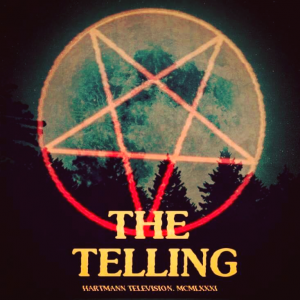 The Telling is the second short from Scottish filmmaker Stewart Hamilton, who produced and directed, as well as composing the electronic score under his alias S.T.R.S.G.N. Hamilton’s first short film was ‘70s/’80s-inspired sci-fi horror The Seeker, which is about to begin an international festival run starting at the Snake Alley Festival of Film in Iowa, and was given this glorious VHS cover mock-up (pictured).

The Telling stars Clare Ross as Samantha who, as per the Indiegogo page, “…returns to her hometown after 20 years away. While she has changed, the town remains eerily familiar and a meeting with an old school friend compounds this feeling of dread. Suffice to say, things take a turn for the worse.”

“Much like Netflix’s Stranger Things, which captures the spirit of so many classic 80s movies, we will look to capture this same period in cult British supernatural dramas,” Hamilton says. Talking about his retro TV influences, which also include The Stone Tape and BBC’s The Tripods, he adds: “For me, these programmes capture, not only a great period in storytelling, but also an amazing era of television production and sound design.”

You can contribute to The Telling here. Perks include digital downloads, PDF scripts and onscreen credits.