What do you get when you mix Sex in the City, queer culture, and the Weird Sisters from Macbeth? If you said your Wiccan aunts that lives in a shared commune somewhere up north, you’re pretty damn close, but not quite there. You get Spell on Wheels (like Hell on Wheels, get it), Dark Horse’s take on being a witch and a woman in the modern world while mixing in a dash of monsters and ghosts to give it a spooky kick in the nards. Originally a five issue series that debuted October 2016, a graphic novel is set to drop this month collecting the entire mini-series along with extra behind-the-scenes tidbits at the end. A fun exploration into the ‘what-if’ world of magic, the comic tries it’s best to present an original view of the supernatural world but falls short of doing anything truly unique.

The comic revolves around a group of three friends in a world where the existence of magic is never really questioned, it just is. One day, while working in their collective business The Sister Witches, an intruder breaks into their house and makes off with a priceless collection of magical artifacts. Knowing that the objects are dangerous in the wrong hands, they hit up their local magical eBay-site (known as the Goblin Market) and find that most of their stuff got sold online, forcing them to track down the buyers in an attempt to trace back to the person who robbed them. Little do they know the strangers that the road hides and along the way find their magic, friendship, and sanity tested at every turn.

Spell on Wheels is ok if you’re a teenage girl who has two close friends and likes being weird (which, to be honest, most of us are.) It’s got an ingrained lesson to be yourself, watch out for creeps, and always back your friends up. It handles sexuality in a smart way and has a very Thelma and Louise type vibe that tends to be missing from a lot of popular entertainment. The story is pretty smooth and is reminiscent of Buffy episodes, with each issue handling a new magical monster or spirit while building up to a final boss. Also, the art and character design is pretty solid, with each lead having her own visual identity while still working with the surrounding scenery. The monsters and ghosts aren’t really that scary, but they’re not meant to be, they’re more like supernatural beings than true horror. Spell on Wheels is the perfect fan-girl fodder, ideal for comic fans who are looking for a bit of themselves in an industry that has been accused of not always being female friendly. 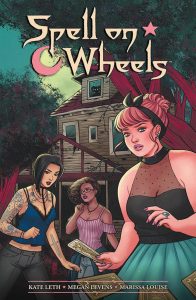 Now, that being said, beyond the surface value of having racially and sexually diverse female cast traverse the wilds of the magic world, it’s kind of boring. Plot wise, the stories tend to start off strong, with a unique problem in a magical world, which is awesome, but then, more often than not, it would get resolved by the characters talking to the bad guy until their ashamed of themselves. Only the big end villain gets any sort of out-of-the box solution and even then, it’s like an off-day-for-Dr. Strange type of problem solving. Also, the lead characters personalities are super flat and play into the archetype of Prince, Princess, and Knight. The lead Claire is the Prince, the one with the destiny who leads the crew, the secondary Andy is the shy and constantly fainting/getting kidnapped Princes, and the third, Jo, is the Knight, a tough-talking girl who protects the other two and makes out with hot babes. It really pigeonholes these women into boring, obvious stereotypes that have been done since the Powerpuff Girls, which is unfortunate. The creators are clearly trying to present a different side of the human experience and stops short of giving that experience to their own characters. A fun outfit and a sassy attitude is not a substitute for a personality.