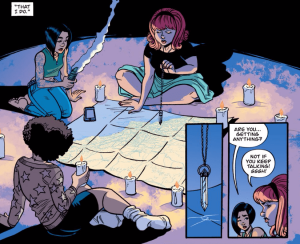 It’s a good time to be alive, it seems, for fans of witches and witchcraft. With Dave Egger’s 2015 film The Witch, along with comics such as The Chilling Adventures of Sabrina, and even talks of remaking classics like Suspiria and Hocus Pocus, the current market is flooded with depictions of empowered, magical women.  Spell on Wheels, the new 5 part miniseries from Dark Horse, is the newest comic to add to this canon, using fun teenage characters to explore similar themes. Although lacking a bit of bite, Issue #1 gets off to a promising start, and it’ll be interesting to see where it goes in following editions.

Spell on Wheels focuses on a trio of women, The Sister Witches, who spend their time giving tarot reading for cash and inking tattoos which have magical properties. When an intruder breaks into their home and steals a cache of their magical items, the witches jump into their pentagram-covered convertible on a mission to get them back. But what the girls don’t know is that something much darker and mysterious lays in wait for them, with an unknown villain seeking the relics for their own nefarious purposes.

Writer Kate Leth does a good job at writing the three central characters, all of whom have entirely separate personalities. The story moves along quickly, and is so fun and fast-paced that it’s easy to crave more when reaching the final page. But Spell on Wheels often feels light and fluffy, avoiding opportunities to take the characters into more threatening situations. There doesn’t seem to be any immediate danger to the witches in Issue #1, with ex boyfriends and annoying customers being more sinister than any supernatural forces on display. Perhaps there will be bigger threats in further issues of the series. 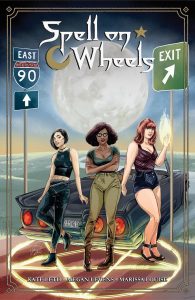 Megan Levens’ illustrations are fantastic throughout the comic, adding a bright, Sunday morning cartoon feel to Leth’s dialogue. The characters’ expressions are all immediately telling and demonstrative, and their diverse personalities are easily discerned through their different hair styles and taste in clothes. Colourist Marissa Louise, whose palette is filled with jolly, vivid hues, is an excellent choice for this type of story.
Overall, Spell on Wheels is a fun, fast paced jaunt through the perils of being a teenage witch. Aimed more at a YA audience, the comic is more akin to Charmed than The Craft, but that’s not to say that there isn’t plenty here to enjoy. Although a slightly increased level of danger wouldn’t go amiss in subsequent issues, Spell on Wheels clearly has a certain magic about it. I’m excited to see where it goes next.