SP Releasing Gets its Hands on Demon Hole

SP Releasing has nabbed the rights to Demon Hole, a spooky horror film which follows a fracking incident that unleashes an ancient demon. The demon heads to a remote forest and torments a group of teenagers as they serve community service.

Synopsis:
A fracking crew drills on sacred Native American land unleashing an ancient demon. There are only two ways out of the woods, succumb to the demon or die.

Demon Hole comes from writer-director Josh Crook, who has previously dabbled in comedy with the sports film Ponchao and also action, with Morir Sonando. He is also the director of Sucker Punch; not that one, but the crime-comedy with Paris Campbell from 2003. He has additionally directed 22 episodes from the adventure series Alien Dawn, which follows a 16-year old racing to uncover the truth of a conspiracy hidden in a comic book series. His genre dealings span far and wide, so we’re looking forward to what he can bring to a supernatural horror film. 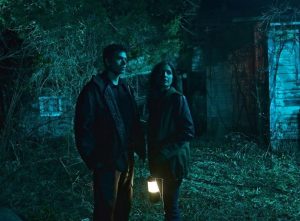 Demon Hole stars Samantha Scaffidi, Samhain and Paris Campbell. SP plan to release the film in the USA this October, so keep your eyes peeled.