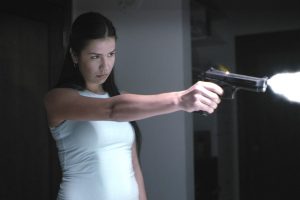 SP Releasing has acquired the rights to the sci-fi nightmare InControl out of EFM. The film follows a group of students who discover a device that allows them to take control of others. They jump into the bodies of their unsuspecting victims, controlling their actions in a way to benefit their real selves.

InControl sounds like a combination of Flatliners and Sorcerers which ultimately means that their scientific discovery is going to, surely, have nightmarish consequences. The film received generally positive reviews after it screened as part of last year’s FrightFest in London, so we look forward to seeing the film when it is released by SP.

If you want to see more, then check out the trailer below to see what the students get up to when they’re in a body that doesn’t belong to them. Sex, crime and insanity clash in a moral tale that warns of the consequences of taking more than you deserve.