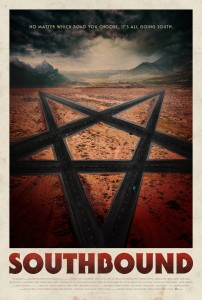 Synopsis:
Five interlocking tales of terror follow the fates of a group of weary travelers who confront their worst nightmares – and darkest secrets – over one long night on a desolate stretch of desert highway.

Thanks to the success or cult following of such films like V/H/S and the ABC’s of Death, horror Anthologies have once again stepped into the spotlight since and recaptured some of the glory that was experienced in the Creepshow heydays. Although ABC’s of Death can at times feel cumbersome films like V/H/S serve up single serving slices of horror which clearly resonate with audiences around the world. So what does a horror anthology like Southbound have to offer audiences? The answer to that question is simply… plenty! Unlike V/H/S and other anthologies, Southbound doesn’t feel like an anthology film. Its segments are bound together beautifully without the use of a wrap around segment but it comes full circle trapping the audience in a never-ending celluloid nightmare.

Southbound’s five tales are incredibly creative. The first segment The Way Out follows two men on the run from floating death-like creatures. Siren follows three members of a band whom after breaking down at the side of the road they are saved by what appears to be an innocent couple who offer them sanctuary. The Accident tells the story of a man who is directed to an abandoned hospital.  Jailbreak tells the story of a brother looking for his sister. Finally, The Way In follows a family who are spending their last weekend together before their daughter goes off to college. Settling down for the night the family are ambushed by a group of masked invaders. 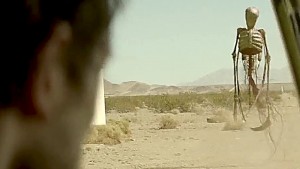 I refuse to go into any further detail about the plot of each story as Southbound is best experienced knowing very little about it. However, what I can tell you is that this is a film that is worth your time. From the outset there are plenty of WTF moments on-screen and throughout. The screen is painted a rather pleasing shade of crimson and as a genre fan, I was thoroughly impressed by what Southbound has to offer. Each segment is just as strong as the one before it which is not only a fantastic achievement for the filmmakers but as a viewer it makes the experience so much better.

If you asked me what my favourite segment was I couldn’t answer you. The entire film is consistent in direction, pacing, set design and their performances. I have very little of anything negative to say about this film as it is really that good. But, be warned, the film does tend to rely on the strange and bizarre so it may cause a few sighs here and there along the way. So if you’re going to watch this film then make sure you go in with an open-mind. If you do this then I guarantee the film will not disappoint you.