MY SOUL TO KEEP: Book Review

Synopsis:
When thirteen-year-old Sky Monroe arrives at her new boarding school, all she can think about is death and connecting with the afterlife. Soon she discovers her school’s spirituality group called Guardians of Light—and they have a secret: The Guardians of Light can speak with the dead…

My Soul to Take is a title that evokes thoughts of the afterlife. That comforting notion of passing through the veil between life and death towards the loving arms of God to enjoy an eternity of serene paradise; or the scorching fires of Lucifer’s lair of the eternally damned. Either way, the phrase conjures up ideas of a life after this one, and that in itself is haunting.

The story centres around teenager Sky Monroe who, after being sent to a boarding school, learns that the institution is a haven for a cult-like organisation who can communicate with the dead. Sky herself has a preoccupation with the subject matter of death, but with the end of the world possibly imminent, she learns that life after death might not be exactly how she imagined. Spirits haunt the schools hallowed halls, and now that she knows the secret of the school’s sect, escape for her and her friend, Damien, will be no easy feat. 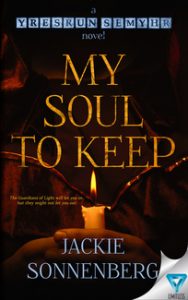 My Soul to Take is a book that will appeal to many horror fans, especially young adult readers. First and foremost, boarding schools are remote and perfect for telling a ghost story; which is why they’ve served as the location for many since the inception of the genre. Furthermore, the idea of being trapped in a new place, far away from the familiarity of your old life, is tragic. Growing up, the idea of being relocated and forced to start over new was scary and inconceivable to many adolescents; not to mention the thought of losing a parent. Here, Jackie Sonnerberg taps into those nostalgic fears most of us felt from time to time in our formative years and imbues them throughout an engaging supernatural mystery.

The story does take a while to get going, though once it does it’s worth sticking around to see how it all pans out. It’s a good read once it establishes momentum, and while definitely not geared towards taste buds like mine, I still enjoyed it. However, this will resonate deeper with those budding horror fans out there; especially the ones who might be feeling a bit lost right during those awkward stages of growing up, or even those who have tragically lost someone close to them. To some, it’ll be throwaway entertainment, whereas for others it’ll undoubtedly connect on a deeper level.