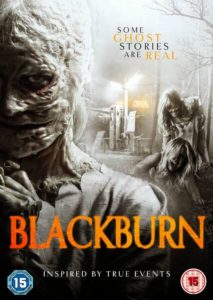 The film stars horror icons Jen and Sylvia Soska (pictured), as well as Lochlyn Munro (Poker Night), Sarah Lind (WolfCop), Emilie Ullerup (A Little Bit Zombie), and Calum Worthy. It is directed by Lauro Chartrand, who helmed 2010 actioner Born to Raise Hell, but is better known for his stunt work, for which he has nearly 250 credits to his name, including The Cabin in the Woods, X2 and 2004’s Dawn of the Dead remake. He also worked on the Soska Sisters’ Dead Hooker in a Trunk.

A forest fire and rockslide trap five bickering college friends in a small Alaskan ghost town with a horrifying history. When they seek refuge inside the torched ruins of Blackburn Asylum, they must fight to survive as the angry inhabitants slaughter the friends one-by-one.