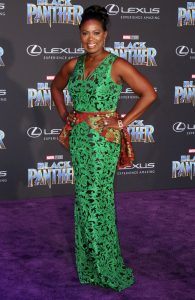 A late addition to the Venom cast has been made with the inclusion of Sope Aluko. You’ll probably recognise her most recently from Black Panther; that tiny film Marvel recently released. She has also starred in the series Graceland, How to Get Away with Murder and Bloodlines.

It’s uncertain what role she will be playing, whether the casting news comes courtesy of re-shoots or if it’s just a late announcement to coincide with the success of Black Panther.

Venom will be unleashed on 5th October 2018.