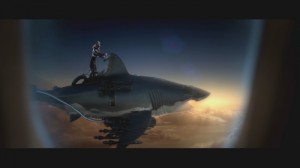 A few days ago we brought you the first look at the eccentric b-movie-esque film from Marc Fehse, Sky Sharks, and although some of you were dubious, it definitely won’t be a Sharknado reincarnation. The undead flying carnage has proven it’s going to be something worth watching as Sony Pictures Home Entertainment have just signed a major deal for it.

Sony Pictures have grabbed the rights to Sky Sharks in Germany, Austria, Switzerland and Benelux, and will start pre-production in January 2016. Michael Trinki, Sony’s product and local acquisitions manager, told Screen Daily this: “The minute I saw the trailer of Sky Sharks, I knew we wanted to distribute this film for our territories. I am convinced that this intense story with its great cast and outstanding special effects, offers fantastic cooperation possibilities for our trading partners. The fans of the genre will also be very excited about it.”

Sony Pictures struck the deal with Raven Banner, who owns the worldwide rights to Sky Sharks, which can only mean that another company will soon take to the cockpit and sign the rights for the rest of the flight.