Sombre Trailer Released for The Last of Us Part II 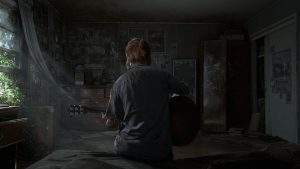 A very sombre and melancholy trailer has been released for The Last of Us II, the sequel to the acclaimed action-survival game The Last of Us that was released in 2013. The Last of Us is the fifth-highest rated PS3 game on review aggregator Matacritic, with a phenomenal score of 95/100. To say Part II is much-anticipated would be the under-statement of the century.

In the first game players controlled a character called Joel, who must escort teenager Ellie across a post-apocalyptic America. On the way you will come into contact with cannibalistic mutants, but the game is particularly focused on the relationship between Ellie and Joel. With a fantastic depiction of its female character and a generally impressive exploration of what it means to be human, The Last of Us is widely considered to be one of the greatest video games of all time.

Check out the release trailer from Sony and Naughty Dog below. Many fans have proposed that Joel may meet his demise in the game’s sequel, but we’re hoping he continues to be a survivor.

The Last of Us Part II will be available in 2018 and will see players control Ellie, who is now 19-years old.