SOLDIERS OF THE DAMNED: Film Review 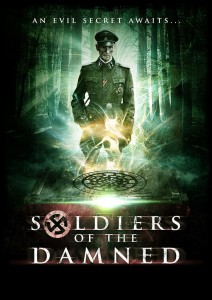 Synopsis:
It’s the Eastern Front, 1944. The Russians are pushing the German Army back through Romania. Major Kurt Fleischer, war-weary commander of an elite troop of German soldiers, is ordered to escort a female scientist into a mysterious forest behind enemy lines to retrieve an ancient relic. As his men begin to disappear in strange circumstances Fleischer realises that the scientist is part of Himmler’s occult department and there is something in the forest that is far more deadly than the Russians.

Effective supernatural Second World War films are a rare breed and, despite a few foibles, Soldiers of the Damned warrants your attention, particularly amidst the current bombardment of horror sequels and remakes. There have certainly been some impressive Nazi occult flicks, both old and new, such as Tommy Wirkola’s Dead Snow: Red vs. Dead or Ken Wiederhorn’s Shock Waves, and whilst the feature debut from veteran TV graphic designer, Mark Nuttall (Prime Suspect), falls short of these it certainly redeems itself with some resourcefully gruesome set pieces and practical special effects that hark back to the assiduous ‘80s and early ‘90s.

The Second World War setting is deftly shot and does a grand old job of replicating the look and feel of the war-torn era. Both the wardrobe and battle scenes give the film a particularly authentic feel, something I’m sure had a lot to do with military advisor Ronnie Papaleo. Unfortunately, this authentic setting is marred by a predominantly British cast that has more problems coming to terms with Nigel Horne’s script than it does dealing with its supernatural adversaries. It’s hard enough to digest films such as Robin Hood: Prince of Thieves that brimmed with American accents let alone films where all foreign characters are played by British actors who, for some unknown reason, keep their regional Brit accents. I just find this approach doesn’t make any sense and tends to sap any kind of authenticity, particularly in period pieces like this one; the exact same thing happened for me with the recent Frankenstein’s Army. Nonetheless, Gil Darnell as Major Kurt Fleischer and Miriam Cooke as Professor Anna Kappel put in befittingly convincing performances although others, such as Lucas Hansen, as Major Hinrich Metzger, felt a tad too overplayed and all too often harked back to the days of Lieutenant Hubert Gruber and undertaker Monsieur Alphonse and his dicky ticker.

Flaws aside, for a first-time feature, Nuttall definitely proves himself a deft hand in the director’s chair, turning the woodland setting into a genuinely effective haunting ground. By creating some particularly unsettling set pieces on a skimpy budget, the nightmarish nature of the setting is by far the film’s salvation. Consequently, Soldiers of the Damned does manage to muster up a pretty grisly depiction of second world gore fare, something which is also bolstered by a classic war film soundtrack that not only adds to the whole WWII feel, but also conjures up much more fear and bloodshed in the audience’s mind than is effectively shown on the screen.

In the end, Nuttall does a decent job of bringing the story to life and if the script had been tightened up somewhat to give the actors a bit more room to provide more convincing performances then the film would have been so much more effective than it ultimately is. Despite its notable weaknesses, Soldiers of the Damned is a decorated, blood-soaked blitzkrieg of mayhem and terror nonetheless.