You’d have to be the least cynical being on Earth to be wholly taken in by the press billing of “a cross between The Shape of Water and Get Out” but even so, Jim Hickcox’s sci-fi horror Soft Matter looks to be be something well worth checking out.

Released on VOD next month, the film comes with some pretty cool cover art and a trailer guaranteed to put a smile on your face, filled as it is with ace ‘80s neon effects and icky moments. 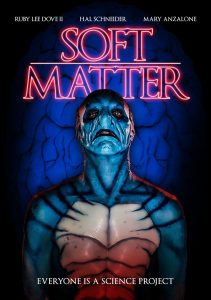 Here’s the official word:
“Jim Hickcox’s feature debut tells of two graffiti artists that break into an abandoned, reportedly haunted research facility in hopes of creating an art installation, but stumble upon a team of demented researchers who are in the process of resurrecting an ancient sea creature – who they now must fight in order to not become their next experiment.”