Social Media Scares in the Trailer for Friend Request 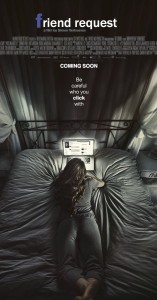 Social media-based horror films are fast becoming their own sub-genre of terror and this trailer for Friend Request has more warnings about the horrors lurking on Facebook. If you never think twice about accepting someone’s friend request online, you may change your mind after watching this.

Synopsis:
When a college student unfriends a mysterious girl on-line, she finds herself fighting a demonic presence that wants to make her lonely by killing her closest friends.

Plenty of comparisons can be drawn between this film and the recent social media flicks Pulse, Dark Summer and Unfriended. All these films show that there is an interested audience that is keen to see teenagers punished for their internet activities. We’re all guilty of spending too much time on social media and Friend Request is another film that desires to take advantage of our modern society’s obsession with Facebook, Twitter and everywhere else we scroll through mindlessly on a daily basis.

As Friend Request does seem so similar to previous films, hopefully it will be able to put a new stamp on the genre and successfully carve its own identity without rehashing previous ideas too much. The film will be present at the upcoming AFM, so keep an eye out for early reactions soon.