Snowblind Getting the Feature Adaptation Treatment 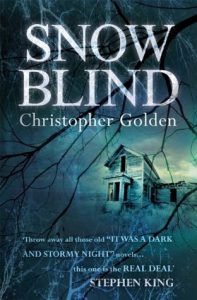 Christopher Golden’s Snowblind is going to be adapted for a feature film with Amber Alexander attached to write the script. There is no director linked to the project yet, but Golden and Pete Donaldson will produce with Zoic Studios.

In Snowblind, a town is ravaged by a terrifying snowstorm that leaves the community changed forever. As this is a horror novel, we’re expecting the events to be similar to The Fog or The Mist, where nights of scary weather walk hand-in-hand with something monstrous.

The book has been compared to authors Joe Hill and Stephen King, with the latter praising the novel as “involving and deeply scary”. It certainly sounds like this is one to add to your “to read” list if you haven’t already.