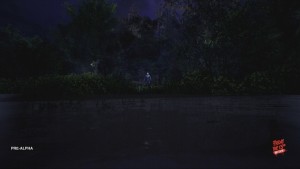 It has been 5 days since the Kickstarter for Friday 13th: The Game has ended and we can now present to you some sneaky footage from the game itself. Be warned, it’s still in pre-alpha stage so it’s a work in progress. Everything you see in the video is temporary and nothing about the game play is final.

When Friday 13th: The Game’s Kickstarter ended last week it exceeded its goal of $700,000 to $823, 704, showing the power crowdfunding campaigns can have and the importance of audience interest. The extra cash means that Jason will be able to carry out more kills; a mirror smash, head crush and, a personal favourite, the rip your heart out – which is as brutal as it sounds.

Take a sneaky peek at the footage below and check out ‘the girl next door’ concept art, too. We will be bringing you all the news and updates from the game, so you don’t miss out.