With the premiere date for NBC’s new Charlaine Harris adaptation Midnight, Texas just days away, the network have put out this sneak peek video for the series, dubbed ‘True Blood in Texas’.

Based on the True Blood author’s best-seller, the show stars François Arnaud (Rabid Dogs, TV’s The Borgias) as Manfred, a charming, powerful psychic who can communicate with spirits. Seeking sanctuary in the town of Midnight, he surrounds himself with both human and supernatural allies.

Also starring are Arrow’s Dylan Bruce as Bobo, the proprietor of Midnight’s local pawn shop; Luke Cage’s Parisa Fitz-Henley as Fiji, a witch who owns the local wiccan shop; Arielle Kebbel (The Vampire Diaries) as mysterious, heavily-armed assassin Olivia; Jason Lewis (Mr. Brooks, The Jacket) as Joe, an angel who knows all of Midnight’s secrets having been around for millennia; True Blood’s Peter Mensah as Lemuel, a wise vampire with a long history in Midnight; Sarah Ramos (TV’s Parenthood) as aspiring writer Creek; and Yul Vazquez (American Gangster) as Rev. Emilio Sheehan, who gets more than a little excitable on the night of a full moon. 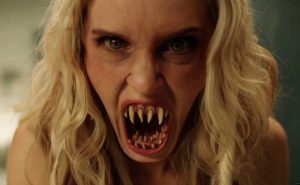