Horror specialists IFC Midnight’s newest acquisition is drug-fuelled, maternal body horror Antibirth, the feature debut of director Danny Perez. The film received positive reviews (including one from Bloody Disgusting, who described it as “gross as hell”) following its world premiere in the Midnight section of this year’s Sundance Film Festival. 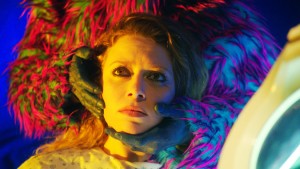 Synopsis:
Trailer dweller Lou (Lyonne) and her best friend Sadie (Sevigny) spend most of their nights steeped in a murky haze of pot smoke and booze-filled TV-watching sessions, venturing out on occasion to party in a desolate community full of drug-addled ex-marines and other miscreants of society. After an otherwise normal night of self-destructive behaviour, Lou awakens with symptoms of a bizarre illness and psychosomatic, recurring visions that she can’t seem to shake. Unfazed, she continues with her hard-living ways, but even her frequent bong rips don’t fully explain the shitstorm swirling around in her head. Without being able to remember anything from the night before, she struggles to get a grip on the reality of her situation as unusual conspiracy theories begin to arise. As her symptoms grow at a rapid pace, something otherworldly has infected her body, and try as she might, it refuses to be ignored.

Antibirth also played Scotland’s Dead By Dawn Horror Film Festival in April. An official release date is yet to be announced.