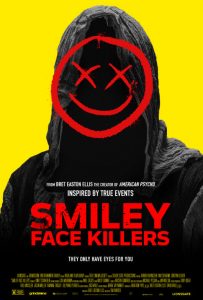 In the film, which was inspired by true events, the California coast is plagued by a wave of mysterious drownings of male college students. Jake Graham, a student struggling to keep his life together, fears he may become the next victim of the killers’ horrific spree after he finds himself stalked by a hooded figure driving an unmarked van…

Smiley Face Killers arrives on Digital, DVD, Blu-ray, and On Demand on December 8th. Watch the new trailer below!