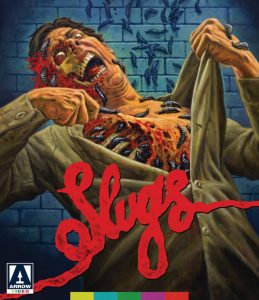 Somewhere in rural America, a number of mysterious deaths begin occurring all over town, the corpses having apparently been eaten from the inside out. The rather inept investigators have no idea what the cause could be, leading a local health inspector (Michael Garfield) to suspect that a strain of giant mutated slugs might be responsible. It soon becomes apparent that a toxic waste dump functions as the slugs’ breeding ground, giving them free access to the sewer system. Able to enter homes through taps and toilets, the town is soon completely overrun. The film’s tagline, “They slime, they ooze, they kill!” is, as the film progresses, hardly an exaggeration.

The premise of Slugs, released in 1988, is obviously ridiculous, and the film functions best as a gross-out horror comedy, rather than something to be taken seriously. On this level, the film works surprisingly well, and the practical effects – in which eyeballs hang from their sockets, blood erupts from the middle of a river, and skulls burst open with maggots – are shockingly effective. There are moments when the film veers too far into self-parody (one close-up shows a cartoonish slug biting a man’s finger), but for the most part, the gruesome effects punctuate the film, elevating Slugs into something more than just another forgettable monster movie.

But, ironically for a film called Slugs, the pace is slow and circuitous, and there are long scenes filled with bad dialogue, exposition, and seemingly irrelevant characters. Some of this comes from the fact that Slugs never really knows what kind of film it wants to be. There are elements of the monster movie, the teen comedy, and the investigative crime-drama, but this ends up weakening the film’s overall effect, stripping some of the fun out of the more successful parts of the film.

One way that the film could be made stronger is by identifying what it is that makes a slug so repulsive. As an animal that basically consists of one long alimentary canal, spending most of its time eating and defecating, it would be fair to assess that – like snakes – that repulsion we feel stems from the fact that it mirrors our lowest and basest needs. This is why snakes are used to such ill-effect in the Bible, because they supposedly represent the total absence of the spiritual. There are some dim references in the film to parthenogenesis and the hermaphroditic nature of gastropods, but it would strengthen the film somewhat to really assess where our disgust of slugs and snails come from, rather than simply pointing out that they’re slimy and annoying. 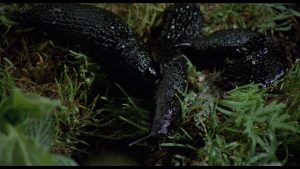 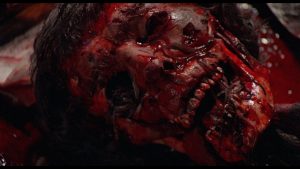 There’s also a pretty questionable morality that runs through the movie too, especially when it comes to the teenage characters in the film. At an illicit party in the woods, the virginal good-girl character rejects the boys’ offers to have sex, only to be followed into the woods and raped. When she manages to escape, she falls into the sewers and is eaten by slugs. In another scene, two teenagers have sex and meet a similarly sticky end, discovering that the bedroom floor is completely covered in the mutated gastropods. Horror films have always upheld a conventional sense of morality (in which teenage sex is almost always punished by death), but if these slugs are really as ubiquitous as we’re constantly told they are, then killing off some more of the ‘good’ characters might have put an end to the film’s questionable moral agenda.

Slugs – for all its faults – is a lot of fun to watch, and if taken on a totally superficial level, is surprisingly effective as an example of the trashy, horror comedy. The practical effects are genuinely disgusting, and there are some inventive set-pieces that showcase the creativity of the writers and the director. The pacing and questionable script certainly lets the film down, but as someone who tries to eat a lot of salads, Slugs is a film that will be sure to haunt me for a long time.