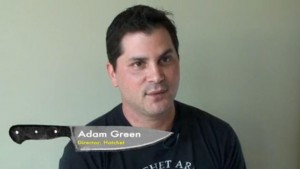 Since SCREAM first hit the stands we’ve been avid supporters of the DVD and Blu-ray releases of Arrow Video. At a time when physical media is supposedly in decline, Arrow continues to push the boundaries of quality and presentation with their releases, giving consumers fan pleasing editions of the films that are a huge part our collective love of horror and cult cinema. The work of Scottish production company High Rising Productions, who have provided interviews, commentaries and documentaries for many of Arrow Video’s best releases is a huge part of what makes these editions so great. We were delighted when we got the chance to have a sneak peek at their first feature length documentary

High Rising Productions have made no secret of the fact that this is the documentary they made while they were making other documentaries. So while they were zipping around the world filming the interviews for all of those other releases, they were patiently putting Slice and Dice together piece by piece. Now you might think that means Slice and Dice is an afterthought, a documentary stitched together with the scraps that didn’t fit in these other interviews, but you’d be wrong. What this actually means is that the scope of Slice and Dice goes beyond the usual slasher movie commentators and gives us fresh insights from a range of genre favourites who might be overlooked by other slasher docs. The usual slasher suspects like Tobe Hooper (Texas Chainsaw Massacre) and John Buechler (Friday the 13th VII) are joined by slasher newcomers like Adam Green (Hatchet) and Patrick Lussier (Bloody Valentine 3D). There are too many names to mention and perhaps it’s for the best that we don’t mention them all here, because one of the pleasures of Slice and Dice is waiting to see who will pop up next.

We’ve seen slasher movie documentaries before, so Slice and Dice might not be breaking new ground, but what sets it apart is its inherent understanding of what makes a slasher fan tick. Sure we can analyse slashers and their sub-text, their place in horror history and so on, but let’s not forget that the main reason that we watch them is that they’re just bloody good fun. Slice and Dice expertly walks the line between examination and celebration. It’s not a po-faced dissection of slashers, nor is it just a fluff piece. Topics include gore, final girls, slasher rules and also an interesting look at some of the failed slashers that we’ve seen over the years.

Slice and Dice is delivered with such enthusiasm and reverence for the genre that the enjoyment that we get from slashers carries over into the documentary. You’ll leave Slice and Dice feeling enthused; wanting to re visit your slasher favourites and seek out the ones featured in the doc that you might have missed. If you love slashers, Slice and Dice is highly recommended.

Look out for Slice and Dice: The Slasher Film Forever on DVD in 2013 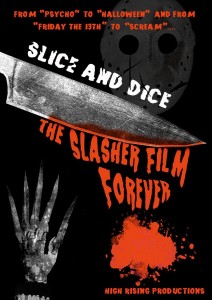