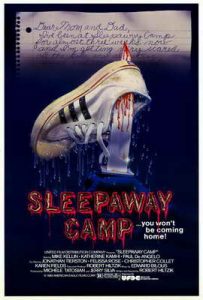 Synopsis:
Angela Baker and her cousin Ricky attend camp Arawak, a summer camp for teenagers. Shy and reclusive, she finds herself being bullied by her peers.

The summer camp and the slasher film have an interesting relationship with one another. One of the many entries to capitalise on this location is Sleepaway Camp, a 1983 title written and directed by Robert Hiltzik. While it certainly has all the elements that are part and parcel to the sub genre, it has enough unique characteristics to separate from the many copycat titles that flooded the market throughout the decade. Sleepaway Camp doesn’t feature a lumbering psychopath, nor is it shot with auteur vision. However, It does have one of the more relatable leads found in Angela Baker, played by then newcomer Felissa Rose. She’s shy and meek, and has little to no dialogue throughout the course of the film. Because of the constant bullying from her peers, whenever anything bad happens to her we empathise with her character a great deal.

Like a many of its contemporaries, there’s a kill count that consists of interesting and creative ways for characters to meet their untimely end. While there’s a predictable shower stabbing, giving a nod to Psycho, there’s also death by beehive, curling iron, and boiling water. What differs in Sleepaway Camp is the motivation behind them. The victims are by no means innocent bystanders or people who are in the wrong place at the wrong time. They’re all people who have bullied Angela in some way, or have intended to cause her harm. Because the victims are all antagonists, it’s impossible to feel pity when they’re dispatched. As a matter of fact, there’s a slight amount of joy in seeing bullies being given their just desserts.

Although it’s made apparent early on that Angela is somehow linked to the killings, the film does a very good job at obscuring the identify of the killer until the closing moments. Suspicion gets cast on Angela’s cousin Ricky, as he’s always getting into fights with others on her behalf, and seems to be conspicuously absent right before another bully turns up dead. Because Angela is so quiet and meek, it’s hard to imagine that she could possibly be responsible for the crimes that are taking place. This was a trait that was lost on the sequels that followed, as they opted to portray Angela as generic slasher villain, complete with clever one-liners.

Aside from the killing depicted onscreen, there’s also a lot of homoerotic undertones displayed prominently throughout the film. Aside from a flashback where Angela remembers seeing her two fathers embracing one another in bed, many interactions between the male characters on the campground come close to pushing sexual boundaries for the time period. More than once half naked bodies are seen interacting with one another in a joyful frolic. Although no full frontal nudity is put on display, more than once bare chests are visible, and much of the boys’ wardrobe consists of short shorts and half shirts. Two years later, Nightmare on Elm Street 2 found a way to weave its own homoerotic content into its narrative. Considering the environment of the 1980’s, it appears to be a subtle commentary on sexuality beneath its on screen violence. 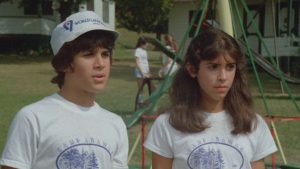 While other slasher films have attained more notoriety than Hiltzik’s effort, there’s a reason why this one manages to hold up. Angela Baker is a character we can all empathise with, especially for those who have been bullied.