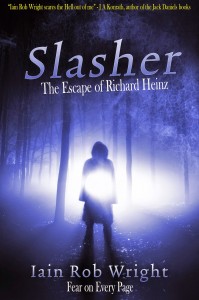 Richard Heinz is a psychopath, a convicted killer and he’s escaped from a secure mental hospital, or the nut house if you prefer. This guy’s highly dangerous so who do we have to recapture him, MCU agents Howard Hopkins and rookie Dr Jessica Bennett and he’s hiding in a forest.

So what’s the plan, we’ll get every Police Officer available within 50 miles of the vicinity, cordon off the area so not even a hedgehog could emerge without being seen and start a systematic search pattern, no problem, he’s going nowhere he’s in a small forest. Wrong, our two agents decide to go in alone while the Police stand back and watch the exits. Heinz has a hostage and guess what, after their first meeting, he now has the rookie’s gun and he starts killing with it.

If I was a policeman reading this, I might take it for a comedy with the Chuckle brothers in disguise coordinating the search. To me, to you, you have the gun we’ve only got one left, no you have it I trapped my trigger finger in the car door. That’s what it felt like anyway.

Things progress and it gets more ridiculous by the second as the blueprint for how not to conduct a manhunt seems to be the only thing these agents have read in recent times. Finally needing a civilian to get them out of the shit, a predictable novella that is certainly entertaining.