Slasher is bringing a new eight-episode season to Shudder this month, and the official poster features the mounted severed head of David Cronenberg, who is part of the cast! 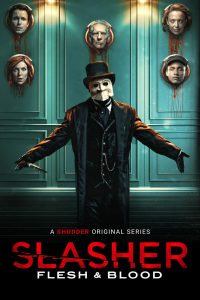 Called Slasher: Flesh & Blood, the fourth season of the horror anthology series follows a wealthy but dysfunctional family gathering for a reunion on a secluded island. Their old wounds and competitive rivalries flare up when the family realises a masked killer is on the island, intent on cruelly picking them off one by one.

Slasher: Flesh & Blood is directed by Adam MacDonald and showrun by Ian Carpenter. The season will stream exclusively on Shudder in the U.S., Australia, and New Zealand, with the first two episodes debuting on August 12th.