A skin-prickling and spooky new global trailer has been unleashed for Ghost Stories and it shows more footage from the 3 scary stories. It looks terrifying and unique as it brings a refreshing edge to traditional means of scaring an audience. We love the spooky atmosphere and the mystery that dominates the story, so we can’t wait to see the film when it is released later this year. 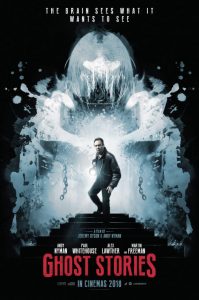 Based on the hit theatre show of the same name, Ghost Stories follows Professor Goodman (Andy Nyman) on a terrifying quest where he stumbles upon tapes that detail three unexplained and horrifying supposed hauntings.

Jeremy Dyson and Andy Nyman are directing the film, which has received rave reviews and will be screening at Glasgow’s Horror Channel FrightFest event in March. If you can’t make it to Scotland, then you’ll be able to catch Ghost Stories in the UK on Friday 13th April 2018.