Frank Martin brings us two short stories featuring classic monsters. In Skin Deep, Laura is a high school track star with great potential. Her wealthy parents dote on her. It’s not quite the same for her older sister, Jessica. The girls’ overprotective parents refuse to let Jessica go on a study abroad trip, and Jessica’s refusal to challenge them leads to an argument between the sisters. Laura, with help from a fake ID, ends up in a bar drowning her sorrows, which is where she meets a mysterious stranger, Remy.

The main draw to the story is the dynamic between the two sisters, who used to be close but have been pulled apart by family secrets and life. The characters are full of angst and emotion. The story is all about family relationships, expectations, and a lack of true understanding between parents and children.

My one real gripe with the story is Remy, the Cajun vampire. His language comes across as a bit cheesy. Living in Louisiana’s Cajun country myself, it doesn’t seem authentic. I liked him better when he went full on vampire than I did when he was just a seducer.

Ultimately it is a love story, only not what you might expect, and a story of the things a person will do in the name of familial love for parents and siblings. 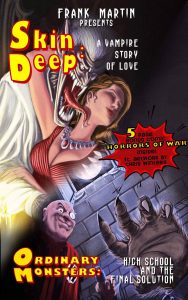 Ordinary Monsters introduces us to another teen protagonist, Liam. In contrast to the first story, this is told from Liam’s point of view. There are similarities in themes though, concerning both family and sibling relationships. Liam’s best friend is Eric, and the story focuses on their bond as best friends and almost brothers. Not everything about Eric is as normal as it appears. Following a drunken party, events spin out of control for the two friends.

These two stories are both, to an extent, about the rebelliousness of youth and teen angst related to protective parents. This is ultimately manifested in monstrous ways. It’s about the teen protagonists and their relationships more than scares or gore. I think teenage readers would really connect with both of these stories.