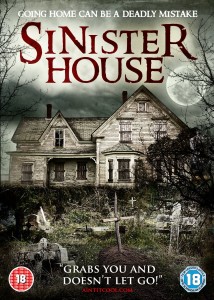 Synopsis:
On the run with a suitcase full of stolen heroin, 3 troubled sisters lay low in the empty house where 2 of them were raised – a place which seems to harbor more than just bad memories of their abusive childhoods…

Changes to film titles after release always worry me, folks. Blame my OCD or call me plain cynical, but I can’t shake the feeling it’s a final, desperate attempt by its creators to mask other mistakes they know they’ve made during production. I’m probably wrong, I often am. I’m sure there are plenty of examples to debunk my featherweight theory, but Sinister House (or House Of Bad) unfortunately isn’t one of them.

Frustratingly, all the ingredients are there for Jim Towns’ latest feature to be a good one – we’ve got a director who isn’t new to the movie game, a modest $150,000 budget, and a tried, trusted and often successful premise of trapped, tormented protagonists in a less than forgiving environment. Sadly, a lorry-load of jumbled ideas, poor narrative decisions, gaping plot holes and nonsensical twists steal away any honest intentions the original concept may have had at the drawing board.

For starters, Sinister House looks and feels like an extended episode of a daily TV soap opera. That in itself is not a crime, I understand – not every great film has to LOOK great – but it’s also not very interesting either. Whilst clean, tidy and precise, it also feels safe, systematic and soulless. The pacing is pedestrian, which is ALSO fine if there’s an indication of direction or an ever-increasing feeling of dread, but when nothing thrilling or horrific happens in a horror/thriller we’ve got huge problems.

With these issues in mind, focus then turns to dialogue and its responsibility of making mundane activities appear remotely absorbing, and while Scott Frazelle’s script isn’t necessarily poor, it’s certainly not strong or sharp enough to lift the piece above mediocrity.

There ARE positives in the form of our 3 attractive leads, all doing an adequate enough job with their fairly stereotypical characters. Sadie Katz provides us with our predictable quota of naked flesh as unstable stripper Sirah, while Cheryl Sands is capable as shunned half-sister Lily – a supposedly cold-turkeying junkie in a house FULL of drugs (albeit the most mild-mannered and well groomed heroin addict cinema has ever witnessed!) – and Heather Tyler’s former convict, Teig, is the brains behind their doomed heist; all of whom teeter on the edge of ‘quite likable’ until an uncomfortable genre-shift changes their personas completely. Unfortunately, for what is ultimately a character-driven piece, there just isn’t enough real tension or generated atmosphere to hold our interest, and their frequent heated exchanges feel childish rather than fraught with impending doom; all presided over by a plodding, uninspired score.

So, yes, my theory about post-release title changes MAY be misguided, but I’ll continue to stand by it while this non-entity is fresh in the memory.