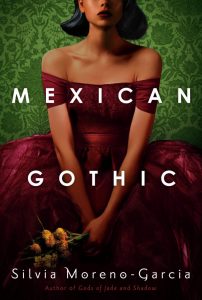 The novel follows Noemí Taboada, a glamorous young debutante who travels to High Place, a distant house in the Mexican countryside, to rescue her newly-wed cousin who sent her a frantic letter in the mail. The cousin married into a reclusive mining family—and as Noemí seeks to unravel the family’s violent and menacing secrets, she realizes there may be no escaping the walls of her seductive yet terrifying new home…