THE MUMMY’S GHOST was Universal’s fourth Mummy opus, the third in the sequence started by THE MUMMY’S HAND (1940) and the second to star Lon Chaney, Jnr as the titular creature. Got all that? Good. However, while following on directly from 1942’s THE MUMMY’S TOMB, this one also changes things up a little. Not much, but a little. 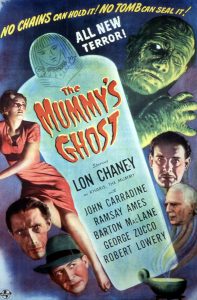 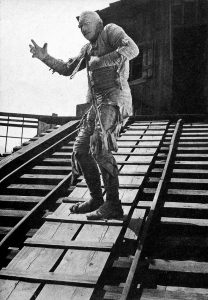 After some stock footage of Egyptian tourist landmarks, we find High Priest Andoheb (George Zucco, acting all doddery in old-age make-up again) giving another acolyte the drill. Yeah, you do remember rightly, Andoheb did die (again) in the last one, so maybe that explains why he can’t even remember the Mummy legend properly himself and tells new guy Yousef Bey (John Carradine) a completely different tale of how Kharis was buried WITH Princess Ananka, and that the ‘Ancient Gods’ decree that they must be reunited. He also seems to have forgotten the name of his own cult, calling it ‘Arkam’ instead of Karnak. Talk about your senior moments.

Anyway, Yousef is promptly packed off to Mapleton, Massachusetts, to retrieve our old pal Kharis (Chaney, of course), who simply wanders out of some woods like a Tana leaf Bisto Kid, despite having been burned to a crisp in a house-fire at the end of the last movie. Meanwhile we meet Mapleton ‘college kid’ Tom (Robert Lowery, who’s clearly thirty-five if he’s a day) and his Egyptian exchange student girlfriend Amina (Ramsay Ames), who comes over all woozy at the merest mention of anything to do with her country of origin. God only knows how she managed when she actually lived there. 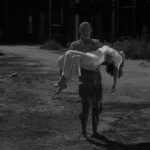 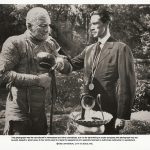 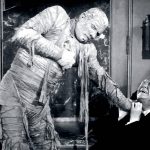 Yousef and Kharis attempt to liberate the mummified Ananka from her resting place in New York’s ‘Scripps Museum’, only for her disintegrate at Kharis’s touch. Yousef immediately declares that her soul has passed into another body – Amina’s, of course – prompting a return trip to Mapleton to capture her and cook up some more of those leaves. But just like old Andoheb and Mehemet Bey before him, Yousef just can’t get a handle on his own raging libido once he claps eyes our hapless heroine in a slinky nightgown…

THE MUMMY’S GHOST isn’t any better or worse than its immediate predecessor, but things are certainly starting to feel a little shopworn. Yousef’s mission may be slightly different to Mehemet’s, thanks to most of the tomb-desecrating Banning family being successfully killed off in the last one, but action-wise it all amounts to the same thing. Once again we get the same recycled shots from the ’32 Karloff original and MUMMY’S HAND as the newly retconned Kharis legend is related. 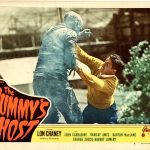 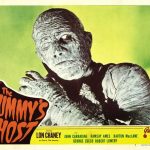 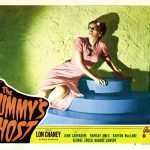 This one marks the first appearance of John Carradine here at Silver Scream, a true horror ‘Hall of Famer’ if there ever was one, whose credits span the decades from turns as Dracula in Universal’s HOUSE OF FRANKENSTEIN (1944) and HOUSE OF DRACULA (1945) to appearances in THE SENTINEL (1977) and THE HOWLING (1980). Outside of horrordom, however, he’s better known for his turn as Casy in John Ford’s THE GRAPES OF WRATH (1940), and for siring a generation of tough guys in the forms of Robert, Keith, Bruce and David Carradine. Here he’s essentially in blackface to play this Egyptian character – at least Turhan Bey was Turkish – so this isn’t a performance that time is ever going to be particularly kind to. But you can always count on Carradine to give it all he’s got.

For all its sloppiness and repetition, this instalment still remains fun viewing right up until its mildly exciting but surprisingly downbeat climax. Even if we are simultaneously pining for the lavish art deco glories of Universal’s glorious thirties output.