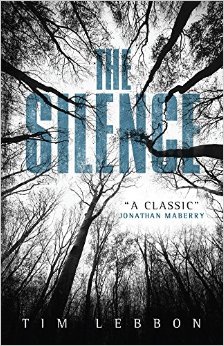 In my mind, no one does the apocalyptic horror novel better than Tim Lebbon. It’s a sub-genre he knows and does very well. He’s visited apocalyptic lands in his novels THE NATURE OF BALANCE, COLDBROOK, WHITE and other works. It’s a genre he visits again with his latest release SILENCE.The Discovery Channel is broadcasting something terrifying. Cave-dwelling archaeologists are discovering an unknown ecosystem and species in the deep dark caves of Moldova. Things start getting bloody and dark very quick and young Ally and her family watch in horror with the rest of the world as it happens on live TV.

A species is let loose from the caves. Vesps they are called. They are monstrous and they are hungry. These rat-like flying bat-like creatures have razor sharp teeth, are blind and hunt by sound, and produce very, very quickly by laying eggs in the victims they consume, first by the hundreds and then by the thousands.

Ally and her family, her mom, Dad, brother, ailing Grandmother and a family friend urgently pack their bags and head for safer grounds away from the noisy and chaotic city. Their struggles are many along the way as they not only fight to survive the hideous flying monsters but monsters of the human form as well.

Ally, who is deaf, must teach her family to use their silence in order to survive and while she connects them to the impending end of the world through social media posts, Tweets, articles and blogs, the impending end to the electricity source is as terrifying as the creatures that swarm
outside by the million.

SILENCE can and will easily be devoured in a couple sittings. From page one, your heart will race with anticipation and the excitement this novel provides. With SILENCE, Lebbon has given us one of the best books of any genre in 2015. It’s truly terrifying and brilliant.