Sightings will See You in November

Billed promisingly (if not a tad dubiously) as ‘Jaws meets Stranger Things’, supernatural sci-fi thriller Sightings tells of a Texas man who must explore what lies beyond our world to solve the mystery of three bodies found on his ranch. The film now has a poster and trailer, ahead of a VOD release in November. 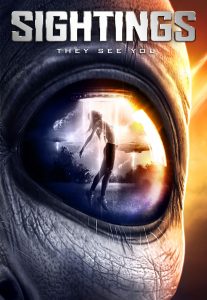 When former Sheriff and skeptic of the paranormal, Tom Mayfield (Arnold), encounters three dead bodies on his TX ranch, he must enlist the help of his conspiracy-theorist brother-in-law (Rawn Erickson II), a local surveillance expert (Basco), and a renowned cryptozoologist (Stephanie Drapeau), in order to uncover who or what is behind these mysterious events.

While being pursued by the local detective (Sizemore) as a lead suspect for these deaths, Tom is forced to reconsider his preconceived ideas of what lies beyond our planet.

Ultimately, he must mend the estranged relationship with his daughter (Tahlia Morgan) and come to grips with the truth of his missing wife (Tiffany Heath), as he discovers the importance of community in survival and the belief in the unseen.

You can see Sightings on VOD on November 7th, from High Octane Pictures.