Following a screening at Cannes last month, South Korean mystery The Wailing (original title: Goksung) has received a super-stylish trailer which you can see below. 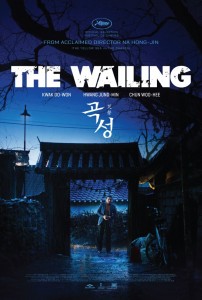 Directed by Hong-jin Na (The Chaser, The Yellow Sea), the film sounds a little like a Far-Eastern The Wicker Man, with a policeman following up on reports of strange goings-on in a small village. Not a pagan cult in sight admittedly, just a mysterious localised virus.

A stranger arrives in a little village and soon after a mysterious sickness starts spreading. A policeman is drawn into the incident and is forced to solve the mystery in order to save his daughter.

The Wailing stars Do Won Kwak (The Man from Nowhere) as the police officer Jong-Goo and Jun Kunimura (Kill Bill, Audition) as the village’s newest resident, known only as The Stranger. Woo-hee Chun (Mother) and Jeong-min Hwang (The Unjust) round out the main cast.

The Wailing hits US screens this week.