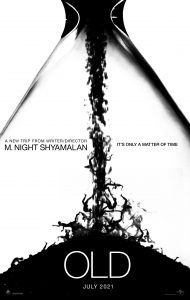 M. Night Shyamalan (The Sixth Sense, The Visit) has revealed that the new thriller he’s directing for Universal will be called Old.

“Feels like a miracle that I am standing here shooting the first shot of my new film,” Shyamalan wrote on Twitter, along with early artwork from the film, which bears the tagline “It’s only a matter of time.”

Old is slated for release on July 23rd, 2021. We’ll bring you plot details when we hear them!