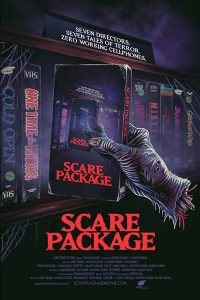 Shudder has acquired all rights in its territories to Scare Package, an upcoming horror-comedy anthology film.

Created by Aaron B. Koontz and Cameron Burns, the film is made up of seven tales of terror recounted by the owner of Rad Chad’s Horror Emporium—an old-school video store—to illustrate the rules of the genre to a new employee. The segments are directed by Koontz, Baron Vaughn, Noah Segan, Courtney and Hillary Andujar, Emily Hagins, Anthony Cousins, and Chris McInroy respectively.

Scare Package will premiere on Shudder in the UK, US, and Canada on June 18th. Take a peek at the goodies inside by watching the trailer below.